I have been reading a lot lately about feminist viewpoints and the equality between men and women. As an historian, I’ve studied equality between the genders all through the history of man (forgive the gender specific term). The men who treated their wives with great respect and equality were definitely in the minority, especially among the ruling class.

The anti-feminist winner, however, has to be one of my most fascinating studies in history in the case of Henry VIII of England. Known by his contemporaries as “Bluff King Hal,” Henry gave women little reason to think he was a kind and benevolent fellow.

Henry knew the ins and outs of marriage and even more about handling a divorce without any squabble. In fact, you might say he was a master at matrimony and an even greater deviser of divorce.

First married to his brother’s widow, the Spanish Katherine, Hal lived peaceably in married bliss (for him anyway) for about 18 years and was considered quite the devoted husband since he had only had two or three mistresses during that time. Things might have rolled along well, but Henry had two problems: First, he had no son to be king after him and two, he took a strong fancy to his wife’s lady-in-waiting—Anne Boleynn.

Now, for all the men who have deserted their wives and failed to provide proper alimony or child support, consider the case of poor Katherine. She was forced to live in a falling down pile of stone, complete with rats and mildew. Her food had to be tasted by loyal servants to make sure she wasn’t “accidentally” poisoned…a fact which probably made it hard to hire “loyal” servants.

Anne Boleynn in her turn, failed to give Henry a son and her end was even worse than Katherine’s, because by then Henry knew how to chop to the heart of the matter, or in Anne’s case, the head. She was beheaded and Henry lost no time in marrying HER lady-in-waiting, Jane Seymour.

Had I been Jane, I’d have hired only ladies-in-waiting who were ugly or old, but it probably didn’t matter since Jane had the fortune to produce the long-awaited boy. She died in the process, which probably makes her the luckiest of Henry’s wives.

Not a man to be discouraged, Henry married wife number four, Anne of Cleves. He was betrothed without seeing the lady, whom he labeled “the Great Flanders Mare” on first sight. It is important to remember that by this time, old Henry was no Adonis himself and not the sweetest tempered of men, but it is said that on their wedding night, he was alarmed to be met with Anne’s hair on a tray, being carried out as he went in!

This marriage achieved the fastest divorce on record, since both husband and wife were eager to be released. Anne collected all she could in the divorce settlement and lived happily ever after without Henry, so you might say she was the happiest of his wives.

Henry, not to be discouraged, married another lady-in-waiting. In fact, his eighteen-year-old child bride, Katherine Howard, was a cousin to Anne Boleynn. She met the same fatal end, losing her head after Henry discovered she liked younger men than him.

Henry tried one more time, marrying Katherine Parr, a 30 year old widow who was already in love with someone else. It wasn’t wise to reject Henry as a suitor, however, so the reluctant bride married the old man.  Katherine was the most educated of Henry’s wives and for expressing her opinion (which conflicted with Henry’s) she almost lost her head. Henry did her the favor of dying before he could do it, which probably makes her even luckier than Jane Seymour.

Forgive this small history lesson, but with all the talk about equality between the sexes and feminist positions, I couldn’t help thinking of Henry and the women—all of them feminist in their own ways—who conducted their own form of gender wars with him. Hope you have better success in your own gender wars!

The 216th boasts a proud legacy

I try to keep this blog as light-hearted as possible, but I also want to write about the things happening around me, so today I will take a moment and tell you about the 216th Chemical Company and their proud and loyal service in the 1950s.

The 216th consisted of some men from many parts, mostly the Midwest, who were brought together and stationed primarily near Denver, Colorado.  While in Denver they conducted routine Army business, but it was when they narrowly missed active duty in the Korean corridor that their true service to their country may have begun.

My father was among those in the 216th who were sent to the deserts of Nevada, far from the fighting in Korea, to fight another kind of battle. These men were among those units who were present for atomic bombs tests in the 1950s. The stories these men can tell are truly hair-raising.

They were the witnesses on the front line of those bomb explosions, witnessing the terrible mushroom clouds, feeling the backlash from the explosion and assessing the damage when it was over. They, hardly daring to wonder about the backlash to themselves, witnessed the most awesome and terrible of all weapons of the time.

What do men do after they have endured experiences like these? Well, they go home, marry their sweethearts, raise families and carry on with their lives. Some became farmers, some government workers, some firefighters, some mailmen and so on. A few even became career Army men.

But above everything else, they remember. They remember the experiences they shared and the comradery those adventures invoked.

For the last 65 years, these men have been meeting in Denver, Minneapolis, Las Vegas and Lincoln, Neb. to maintain the connection that was forged all those years ago during their time in the 216th.

Age, illness and death have pared down their numbers from around 200, to their reunion this year bringing together some of the final few.  I have been privileged to be a part of a few of these reunions, accompanying my father as he travels to join his comrades in arms for another review of the “good old days” and all the days since. 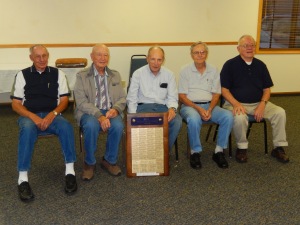 It isn’t only the members of the 216th who attend. Wives, many now widows, continue to honor their husbands’ memories with another jaunt down this memory lane. Even children, such as me, have become known to each other as we try (and generally fail) to understand just what our fathers experienced in the deserts of Nevada all those years ago.

Styling themselves the “Forgotten 216th”, these elderly veterans have gathered for another reunion in Lincoln and it is sad to see their diminished numbers, but it is wonderful to see that the sands of time have not reduced their pride in their accomplishments or their pleasure in each others’ company.

So, I say to these proud veterans thank you for your time serving your country; your legacy can never be forgotten by those who love you!