About my new underwear…

I think it’s fair to say most people would state that I indulge my grandsons a little….okay, so maybe I indulge them a lot. And because of this tendency to indulge them, I may have been the victim of a vicious prank by my children.

It all started with a bunch of little rescue dogs collectively known as the “Paw Patrol.” My grandchildren, while not abandoning such old favorites as Curious George and Wild Kratts, have become huge fans of the Paw Patrol.

They watch the episodes so much that I can say the words along with them and I have been grilled repeatedly by the boys as to which one is which. “Which one is this, Grandma?” asked my younger grandson in his best teacher voice on Skype one night. He was pointing to the little canine grinning at me from the front of his shirt, but fortunately, before I had to reveal my ignorance he was so eager to share, that he answered his own question. “That’s Marshall, Grandma,” he told me importantly and I nodded as though I’d known it all the time.

It turns out that the members of the Paw Patrol are a million dollar franchise, to which my grandsons are devoted in their efforts to collect them. They collect stuffed toys, action figures, pillows and blankets, rugs, shirts, hats and socks. They even have some Paw Patrol bubble bath that they use at Grandma’s house.

I thought they had reached the limit of Paw Patrol paraphernalia, but as usual, Grandma was behind the times on Paw Patrol. As my faithful Paw Patrol expert informed me one day, “I just like Paw Patrol unnerwear, Grandma!” Paw Patrol underwear! Grandma went in search of it and sure enough, all those little rescue puppies are decorating some pretty cool pairs of undershorts.

Grandma was able to relax. I had provided my sweet little boys with the ultimate in Paw Patrol gear. That was the end of it…or so I thought.

It seems that my quest for Paw Patrol “unnerwear” had given my younger daughter and her partners in crime (her husband and her best friend) an idea for something they could do to torment Grandma. On a visit to my town, they all disappeared for several hours at the friend’s house. I didn’t think too much of it until they came back to my house with a little gift for me: my very own “unnerwear” which they had decorated with Paw Patrol iron on stickers. 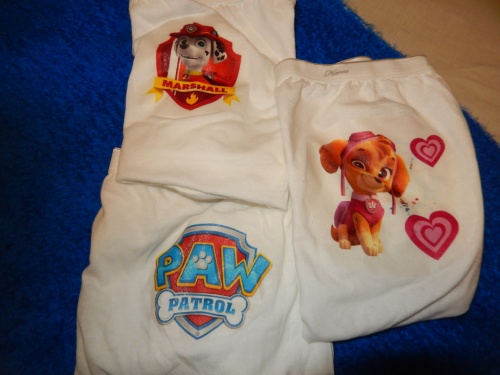 To make sure that I would not be able to refuse, they had my grandsons deliver the underwear to me. The boys, were of course, confident that I would be thrilled with my new stylish underwear. They brought it to me, exclaiming over how cool it was that now Grandma had Paw Patrol underwear, just like them. Although my  older grandson did point out that there was one significant difference, “It’s such BIG Paw Patrol underwear, Grandma!”

Needless to say, I have not attempted to wear the Paw Patrol underwear. Why? You may ask. I think it would be extremely awkward to put on the underwear featuring the little rescue canines, but even worse would be for me to get into an accident in those things. No, I think this Paw Patrol underwear will remain in the back of my drawer…at least until my daughter and her friend celebrate their birthdays; then they are going to get a Paw Patrol special delivery!