Life is a skating rink…so let it slide!

Although I love watching people engaged in the sport of ice skating, I have never desired to be good at it. The only pair of ice skates I ever owned were given to me as a seven-year-old child and I never made it past the stage where my father held me upright, while I tried to force my ankles to push my feet and the ankles always retaliated by folding like a couple of damp towels!

Since I outgrew those skates, I have kept my feet on un-bladed ground and limited my winter activities to cursing the snow! That is not, unfortunately, the end of my association with ice. And living in a place like South Dakota, I have had more than my fair share of opportunities to tangle with ice.

So far, the score is: ice: 10, me: 0. Driving on ice has always been problematic, because the car has even less experience dealing with ice than I have. Only twice have I turned a complete cookie in the road and that little dent in the front lawn that Roy thinks was done by the dog…wasn’t done by the dog, so much as I misjudged the driveway one icy day and I was lucky I only made one dent! I’m still going to let the dog take the blame! 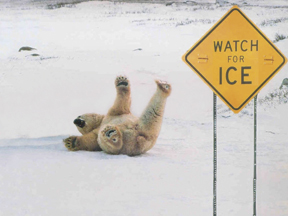 That would be bad enough, but I don’t walk on ice any better than I drive on it. There was the fateful January when a freezing rain came down for about two hours, putting a layer of ice on my front steps about two inches thick. After I had crawled down three steps and slid down the rest, holding on to an equally icy banister, I spent the next two hours with a hammer. I only ruined three steps, but all that ice came off.

A broken wrist is probably the worst ice-related event I’ve had, and that was also gained by trying to walk down a set of icy steps. After those events, Roy installed an ice-resistant material on the steps and my days of sliding down them have diminished.

Not so the ice everywhere else. On a year like this, ice has been prevalent no matter where you go. I had to take the dog for a walk one night and it was her, running faster than she should have and me, taking it in baby steps, crawling along. I’d have made it, but when I called her back to me, she came flying up on the ice, had all four legs slip out from under her. She came skidding towards me like a large, furry battering  ram and I took two hasty steps back before my legs slipped out from under me and we landed together in an awkward heap on the edge of the driveway.

I could live with all of this, but it seems that the mean streets of Aberdeen are out to get me this winter. Roy likes to go to the college basketball games and we usually get there late. That means parking in the dark some distance from the stadium.

On the first occasion, I dropped him off and went to do some shopping. I came back, parked and hurried towards the building. When my feet went out from under me, I hovered in the air and then came down on the one part of me that always provides padding. Nothing truly damaged but my dignity and since no one saw me, it wasn’t too bad.

On the second occasion, Roy and I parked and headed towards the building together. We were walking on the sidewalk side-by-side and suddenly, he was continuing to walk on dry pavement and I was skidding for my life on the ice on my side. Roy made a grab for me and that stopped me…from skidding. The only thing left to do, then, was fall and I did it..on my knee. You know that old saying about “big girls don’t cry?” Well, they do when they land on their knees on the ice.

The latest incident came just this weekend. The game was over and Roy said, “Let me go get the car.” Offended, I insisted I could walk…I was wrong. I made it all the way to the car and got the door open. Without warning, my feet found the only ice for a block around and slid, down and under the car. I was impressed; I didn’t think I could fit under the car, but there I was!

Anyway, this is the end of my story of icy frolics. I hope the rest of you are having better luck and that my luck doesn’t get any worse! Happy winter!